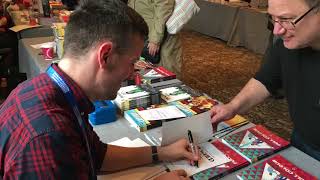 I was thrilled to be involved in the Edinburgh International Book Festival this year. Not only did I get the chance to sell my books as part of the Edinburgh Comic Art Festival, I also got to deliver a workshop on storytelling to a sold out audience of all ages. I took the them through the dos and don'ts of creating believable characters, as well as planning exciting plots for their first comic. Want to keep up to date on future events and my projects, as well as learn about

Woohoo! I’m delighted to say that the Kickstarter for Plagued volume 2 was a huge success and raised way above its goal amount. I’d like to thank all backers and the amazing and support creative team at BHP Comics - with special mention to the wonderful artist, Tanya Roberts. The script is finished and production is officially underway. Sign-up to my newsletter for behind the scenes updates and some free digital comics to boot. #Plagued

BHP Comics have just announced a Glasgow-wide competition, in association with Glasgow libraries and schools, asking pupils to create their own character for the upcoming second volume of my hit comic series, Plagued: The Miranda Chronicles. Pupils from primary six to the 2nd year of high school are being invited to create a character to fit into the award-winning series, writing their back story and designing how they look. The winning design will be featured in volume two

'Beats of War' issue one complete

I’ve been hired to write a DJ sci-fi comic

Catch me at MCM London